No offence to Afridi fans but your idol has a bad habit of becoming famous due to his immature comments, offensive actions on & off the fields. Ball-tampering, unnecessarily speaking against other nations and so on are few things which Afridi should seriously think about.
Pakistani cricket all-rounder Afridi, a.k.a. as Lala has created a new controversy after his statement on Kashmir (internal issues of India).

“It does not take a religious belief to feel the agony of Kashmiris.. just a right heart at right place. Save Kashmir”.

Don’t know what he wants to prove with his ridiculous statements & tweets.

We have seen this more often, whenever someone points a finger towards India, Gambhir is the first one who comes to the rescue.
In reply to Shahid Afridi’s tweet, see what he tweeted. 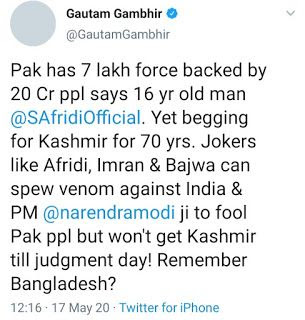 You can imagine toxicity of the statement when even a guy like a Shikhar Dhawan spoke against this. 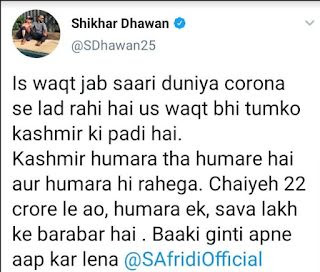 When someone will throw stones on the nation even gentleman like Raina will not keep calm which is rightly so. 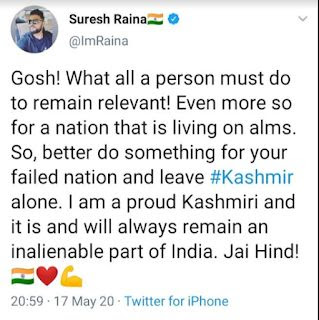 Recently they both helped charity foundation which is run by Afridi but seems like now they won’t support him anymore because of his offensive comments.

Dear Afridi, you might be the richest cricketer in Pakistan. You also might be running some charities which are a good thing but if you won’t respect other nations & will not stay away from other countries internal issues, you won’t get the respect back which is a bitter truth.
In addition, I’m doing a kind request to you, please stay in your limits. Don’t spread hate and don’t let your own name & your country’s name down.
Sorry if anyone of you didn’t like the way I represented this article but the purpose of the article was to give honest review nothing else. Therefore, I’ve written in a bit of a rude tone.

A software Engineer who is trying to connect people around the globe with the world of sports and different leagues all over the world. Stay Happy but never satisfied! Live, Love, Laugh, Life goes on!

Please visit us on